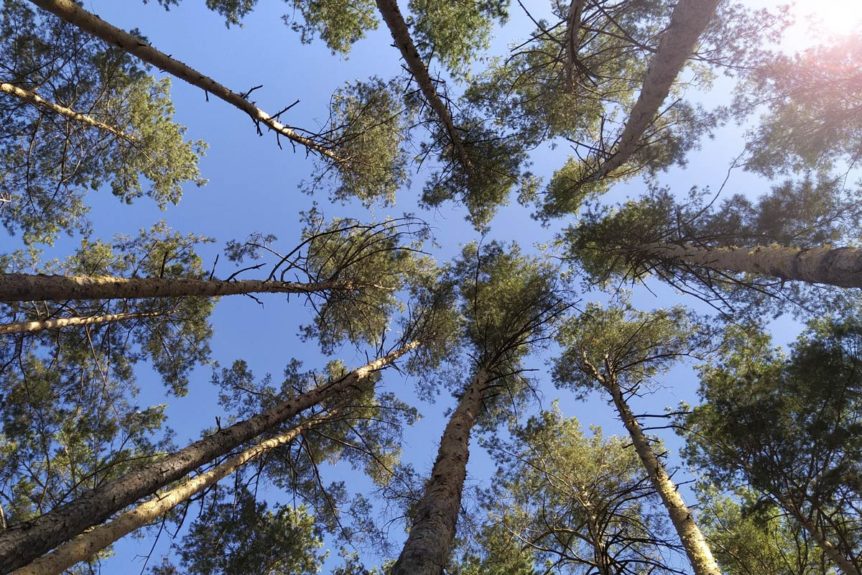 Iowa is home to some very large trees. One Des Moines man equipped with precision instruments, and a selfless passion painstakingly documents these giants. Not only does Mark Rouw humbly volunteer a lot of his time for this worthy cause, he quietly spends a lot of his own money. Mark spends endless hours trekking across Iowa pursuing rumors and requests in search of silent giants. He has “discovered” and documented numerous State champs but has also felt the crushing disappointment of arriving too late only to discover evidence of a giant tree whose shade shall never be enjoyed again. If only someone had known the significance, maybe the tree would have been celebrated and preserved instead of being destroyed. This is Mark’s mission.

Mark recently came to Davenport to do his thing. I joined him. We both had wish lists of possible records and a few “sure things” to visit. So many trees, so little time! Potential champion trees are determined by a formula combining 3 precise measurements into a score. The three measurements are circumference (at breast height – 4 ½ feet), height and average crown spread. Mark is meticulously accurate and notoriously conservative in these measurements lest there be any subjectivity or legitimate cause for dispute. We visited and measured a dozen trees. When the dust settled, we had “discovered” 3 new state champions and one second place. We also remeasured an already documented state champ to discover that it was even larger.

I spoke to Mark Rouw recently about his mission. Here is that interview:

SC: Mark, how did you get started with this… “hobby”?

MR: In the early 70’s at the Main Library in Des Moines I saw the National Register of Big Trees. I devoured all of it. Soon after I started looking more closely at trees around town. Actually, before that, after school, I’d go down to Birdland Lagoon. There were large cottonwoods and I would marvel at them. Some were 17 feet in circumference and 100 feet tall.

My dad was an oil salesman and delivered it also. In the Summer, I’d ride with him and always be looking at big trees. We were in Hardin County and saw a big cottonwood. I got out and measured it. It was over 20 foot in circumference and I got pretty excited. I think that was the tree that spurred on this quest… in 1973.

In 1978 Iowa started it’s official Big Tree program. There was an article in the Des Moines Register soliciting nominations. A couple weeks later the results were published. I read it several dozen times. That was validation that what I was interested in was maybe worthwhile.

SC: Why is this important to you?

MR: It’s all about accuracy. Very often height is very exaggerated and considered to be accurate, official, used in books or published as fact. What I’ve found is heights were often exaggerated by tens of feet. I think there’s a need for accurate measurements and there are not a lot of people here in Iowa doing this. Here in Iowa we really didn’t know how tall these trees got. Some woodlands have been cut down two or three times. For example, white pines, when I started measuring them in White Pine Hollow circa. ’85 the tallest one was 129 feet tall – taller than anything else I had ever measured. They average about a foot a year. The last year I measured it, it was about 136 feet tall. Then a few years elapsed before I returned to discover that lightning had killed it. I believe, with some confidence, that it was the tallest tree in Iowa before it was hit. Some White Pines that are still there, were not as tall back then. These trees are now 147 feet tall. So, I believe that had the other one survived it would now be over 150 feet tall. Another White Pine in Fayette County is over 148 feet now, not over 150 feet yet.

(Interviewer note: 150 feet is considered by some purists to be an elusive milestone.)

SC: How often do you show up to discover a giant stump where a suspected champion once stood?

MR: In terms of Davenport… pretty frequently. The thing about big trees is that they have no official protection. If the homeowner wants them down, they can cut them down if they choose. However, it is hoped that by designating them as State champions or significant it will reduce the likelihood of them being removed. Since the biggest ones are often also very old, and reaching the end of their lifespan, it is important to have contenders lined up to be the next state champion.

SC: Who pays you?

MR: (laughs) Still waiting on that one. I did get a small amount from Des Moines Audubon Society. Beyond that there has really been little compensation.

(Interviewer note: since this interview I and fellow board members of the Iowa Arborist Association voted to fund Mark $500 annually in his mission.)

SC: What have I not asked that you would like our readers to know?

MR: I wish there were more people aware of the Big Tree Program. I am contacting private landowners. Some are very suspicious and distrustful. It would be nice if more people knew that this was a selfless thing and I have no ulterior motives. The original stuff is almost gone. The past lack of foresight is why it is important to be able to currently answer the question: “How tall can a certain species of tree get in this part of the country?” with an accurate answer. With climate change within the next few decades, some of the tree species in Iowa are going to have a tough time surviving. If we don’t start gathering information, particularly height potential, now, we may not have another chance. Most of our champion and significant trees are in parks, cemeteries or people’s yards. These open grown trees tend to develop girth but not height. The tallest trees are found in timbers. There is so little old growth timber in Iowa that we still don’t know the height potential of many trees.

Iowa’s big trees are documented at:

Mark has visited and confirmed most of these champion trees. Let us know if you think you know where a potential champion is.