People You Should Know: Mark Rouw 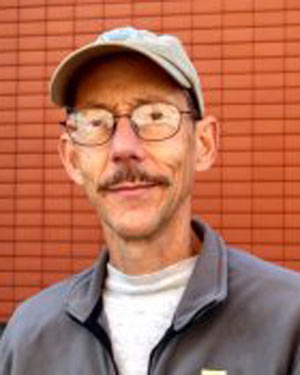 Animal Specialist at the Science Center of Iowa

I attended Grand View University for three years and earned my BA at Drake University with a major in painting and drawing. I worked on rental properties for a few years and also did some commissioned paintings. In 1985, I started working at the Science Center of Iowa where I presented programs and helped maintain the Animal Collection. I am currently the Animal Specialist at the Science Center. A few years ago I did the illustrations for a “Field Guide to the Amphibians and Reptiles of Iowa”.

I started measuring big trees in 1972 or 1973. My first really big tree was a cottonwood in Hardin County that had a trunk circumference over 20’. After that find, I was hooked on hunting for big trees. In 1978 the Forestry Bureau of the Iowa DNR started our Iowa Big Tree Program. Since that time, I have recorded notes on well over a thousand Iowa big trees. I have measured hundreds of them, and a number have been designated as state champion trees. Over the years I have been lucky enough to find a few national champion trees in Iowa, including a scotch pine in Nevada, a white poplar in Onawa and two European alders in Davenport. A roundleaf serviceberry in Dubuque County may soon become a national champion. 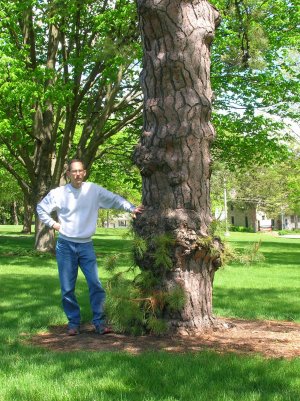 When traveling, I always keep on the lookout for big trees. I have located the following national champions in other states: ebony blackbead co-champions in Texas, Rocky Mountain ponderosa pine in Colorado and a Black Hills spruce in South Dakota. My largest national champion was a Fremont cottonwood in Arizona which reached a circumference of 42’ before it came down a few years ago.

Recently, I was part of a Native Tree Society expedition in the San Juan National Forest that discovered a new national co-champion Colorado blue spruce with a height of 165’. Last year, I found a very tall Rocky Mountain ponderosa pine. This year it was documented with a height of 162.3’. This is the tallest known ponderosa pine in Colorado and I was honored by having the tree named after me. Most of my big tree work continues to be done in Iowa. A number of years ago I started updating the Iowa Big Tree Spreadsheet. I did measure the state champion black ash and I’m still looking for new state champions, but now I’m also updating the dimensions of hundreds of previously measured trees. I have also spent countless hours updating changes in the tree owner’s information. For several years now, I have been working on a project to measure tall trees in White Pine Hollow in Dubuque County. So far I have found at least ten species that surpass a height of 100’. The tallest tree I have found in the preserve is a white pine that reaches a height of about 145’!